A Brief History of the Leamington and Midland Counties Archery Meeting

Archery has been associated with Leamington for a very long time. It is known that the sport was practised as early as 1834 on Newbold Archery Ground, now part of Jephson Gardens, a public park near the centre of the town. The Grand National Archery Meeting, the first of which was held in 1844, was held in Leamington in 1851 (see 1851 Report), and it was in combination with that meeting that a regular Midlands event was established. The picture below is from that first meeting.

The Leamington and Midland Counties is thus the second longest established fixture in the archery calendar, and it has been held in Leamington for most of its history of over a century and a half. Until 1885 it was organised by Mr. Henry Bown. He gave it up in that year, following which an organising committee was formed, chaired by the Mayor of Leamington. How long that committee remained in being we are unsure, because our records are far from complete. However, we do know that in 1963 a joint organising committee of the East and West Midlands Archery Societies was formed and for a while the shoot alternated between Leamington and the East Midlands. For many years now, however, it has been organised by the RLSAS and held at the Old Leamingtonians RFC in Leamington.

In its very early days it must have been quite a grand affair, as the picture suggests. Money prizes starting at £8 were awarded, a lot of money in the 1880s! The rounds were a Double York for gentlemen and Double National for ladies, and on a third day there was a handicap shoot.

Some of the more notable trophies such as the Lady Champion’s Mirror, the Newall Silver Belt and the Leamington Medal, pictured below, are unique. 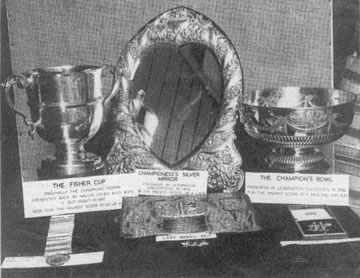 An appeal was held in 1885 to local tradesmen, residents etc. and what is now the Fisher Cup was bought for the Gentleman Champion and the Mirror for the Lady Champion. A Major Fisher, with his third consecutive win, retained the Cup outright, a second appeal was held and a replacement purchased, and Major Fisher subsequently gave the cup back. You can imagine all this happening today!

The tournament has enjoyed a very high profile over the years. In 1955 it was combined with the International Trials. In recent years it has tended to attract fewer archers from beyond the Midlands, but it has a loyal following from archers who retain a sense of the traditions of our sport and who want to shoot in a relaxed friendly atmosphere. If that includes you, send us your entry. You will be assured of a warm welcome.